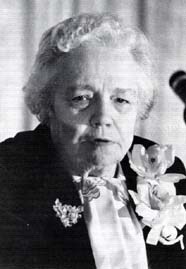 In celebration of National Women’s History Month, we thought what better way to honor the history of credit unions than by featuring one of the women who played a huge role in founding and organizing U.S. credit unions, Louise McCarren Herring.

The early pioneers of the credit union movement included both men and women of all backgrounds and ages who shared their vision to create a not-for-profit financial cooperative. Louise McCarren Herring was one of the youngest, at just 23 years old, when she started her activist work for the cooperative movement. She is now referred to as the “Mother of Credit Unions” for her efforts in organizing over 500 credit unions in her native Ohio.

Having obtained her business degree from the University of Cincinnati, Louise was driven to organize credit unions to better serve employees of the Kroger Company’s grocery chain, where she worked in the corporate office. While working at Kroger, Herring began to see the effects that debt had on people. Wanting to do more, she heard about a new type of financial institution, called a credit union, that was set up as a cooperative where people pooled their money together to loan to each other.

Herring forged ahead and began by creating 13 volunteer run credit unions to assist Kroger employees with loans. Continuing to spread her knowledge and drive for a community-focused financial institution, she served as an important delegate during the 1934 Estes Park Conference, which at that very conference, established the Credit Union National Association, better known as CUNA, the national association that advocates for America’s credit unions. She continued on to become the first Director of the Ohio Credit Union League.

Herring was an avid supporter of the dual share insurance system, helping to establish the private National Deposit Guaranty Corporation, which is now known as American Share Insurance (ASI)—the private insurance that SafeAmerica Credit Union uses today to insure your funds here at the credit union.

CUNA today annually awards the Louise Herring Award for Philosophy in Action, which recognizes those credit unions which “demonstrate the exceptional effort to integrate credit union philosophy” (not for profit but for service) into the daily operations of their credit unions and recognize their commitment to superior service to their member/owners.

Herring had a passion for helping others and was a firm believer in equal and fair access to quality financial services. There are many women involved in the credit union movement who paved the way for credit unions to thrive. Thanks to them, we are all able to benefit today.